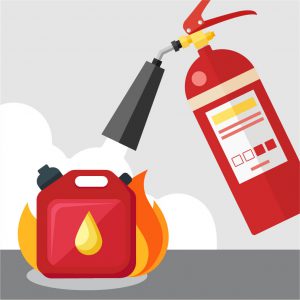 What is a Class B fire?

Class B fires are fires which involve flammable or combustible liquids. The presence of these liquids, which are also known as hydrocarbon fuels, represent the fuel aspect of the fire triangle (heat, fuel and oxygen) and provide the materials necessary to begin, develop and maintain a fire.

The type of flammable liquids involved in Class B fires include petrol, diesel, thinners, oils, paints, wax, cooking fat and plastics which melt. Therefore, they are common in a host of environments and pose a risk for a lot of businesses. Obvious hazardous environments include petrol stations, factories and food preparation facilities. However, they can also be a risk to a lot of retail outlets, offices and public-access properties (such as schools and hospitals) as these environments are likely to have some of these liquids in the vicinity – such as paints and cooking fat.

One of the biggest dangers of Class B fires is that they are rarely ever controlled (in contrast to Class A fires which are used for bonfires and stoves). This means they can easily develop into an incredibly dangerous fire that can destroy your building and fatally injure people within it.

How do you extinguish a Class B fire?

One method of fire combat which should not be used in the event of a Class B fire is a water fire extinguisher. This is because a lot of flammable fuels have a specific gravity of less than 1.0 – such as gasoline or oil – and this means they will float along the surface of the water. Therefore, the fire will not be extinguished and will simply continue to burn along the top of the water.

How do you avoid Class B fires?

If you own or manage a commercial environment, it is your legal responsibility (as stated in the Regulatory Reform Order) to remove and reduce the threat of fire as far as possible. This includes putting measures in place with lower the possibility of a Class B fire. The best way to achieve this is to store all flammable liquids safely, securely and far away from any possible sources of ignition.

According to The Dangerous Substances and Explosives Atmospheres Regulations (2002) “when not in use, containers of flammable liquids should be kept closed and stored in suitable cabinets or bins of fire-resisting construction and which are designed to retain spills”.

Not only will ensuring this practice is always conducted in your workplace help you to comply with all your legal obligations, it will also make the likelihood of a Class B fire much smaller, making your environment much safer as a result.