There are many regulations in place to keep public areas and commercial premises safe from the threat of fire up and down the country, from the guidelines detailed in the Regulatory Reform (Fire Safety) Order, through to the laws governing safety equipment and evacuation procedures.

When it comes to situations in which large congregations of people are present in a confined space, a whole new set of considerations come into play.

Any high-density gathering of people requires extremely detailed and focused safety measures to be in place, and fire safety is very much towards the top of that list of priorities. 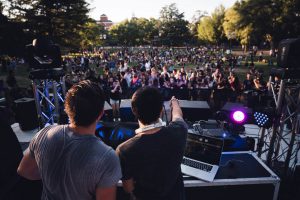 Fire safety at large open air events begins with the same fundamental practice as any other public environment: the carrying out of a fire risk assessment. Though applied on a larger scale, the fundamentals of the assessment (identifying hazards; identifying peoples at risk; evaluating, removing, reducing and protecting from risk; recording, planning, informing, instructing and training; reviewing) remain the same.

Extra attention must be paid to ensuring that all attendees of such events are informed of their responsibilities in regards to fire safety. This is particularly pertinent at open air events that include camping accommodation or tented performance areas. Tent materials are highly flammable, and fires spread rapidly through camp grounds. Preventing campers from having open flames (e.g. from cooking equipment or campfires) in or near to tented areas is an identification and removal of a hazard, and having designated fire wardens regulating these spaces will help to reduce the risk of fire.

Events taking place in large stadia come with their own set of considerations in relation to fire safety. With feature sporting events such as the Rio Olympics and Euro 2016, this year has been a big one for stadium safety, and organisers have had to remain vigilant to safety threats.

The fire risk assessment required by the Regulatory Reform still applies here, but the nature of the stadium environment requires extra measures.

Smoking – In 1985, a large fire broke out at Valley Parade, the then home of Bradford City Football Club, causing the tragic loss of 56 lives and injuring hundreds. It was later discovered that the blaze was caused by a fan dropping a cigarette onto flammable rubbish that had collected underneath the terracing (the ‘voids’).

While smoking in public places is now largely prohibited, even designated smoking areas must be properly regulated to avoid accidental fires (and discourage arson). Located in well-ventilated spaces, smoking areas should be kept well away from buildings and regular emptying of bins and clearing of dropped rubbish is vital.

Avoid Waste Buildup – Litter that collects at stadia, from abandoned programmes to food packaging, provides ample fuel should a fire break out, so it is strongly in the interest of safety that waste should not build up in any area of the arena.

Evacuation Procedure – In relation to events held at stadia, there must be designated “places of reasonable safety” that can accommodate people and keep them safe from fire for a minimum of 30 minutes. These can include the pitch/playing surface/performance area in the centre of the stadium, an open-air stairway not considered flammable, or an exit that has fire resistance levels that can withstand a blaze for 30 minutes or more.

Scutum London operate throughout London and the South East, providing fire safety services and equipment for all businesses. Get in touch with our team today for expert advice.