Scutum Group has decades of experience when it comes to providing fire safety equipment and training to businesses across London and the Home Counties, but we are also aware that many companies in the region are in danger of not meeting their responsibilities when it comes to fire safety.

With this in mind, we carried out a survey of 100 office workers across the capital to determine what the level of knowledge and awareness was regarding fire safety, and where there might be areas for improvement.

The Regulatory Reform (Fire Safety) Order, which is the final word on fire safety in commercial environments, is clear when it comes to the necessity to nominate a ‘responsible person’ within the business. This determines who is in charge of carrying out all fire safety tasks, whether proactive (doing fire risk assessments, clearing obstructions from escape routes, checking fire extinguishers, testing alarms, performing drills etc.) or reactive (coordinating evacuation during a fire, rectifying faults that lead to a fire etc.)

Our findings indicated that almost half (49%) of the businesses surveyed listed a facilities manager (29%) or administrative worker (20%) as their ‘responsible person’, and these people were almost always also in charge of general health and safety on the premises.

Lack of Risk Assessment and Training 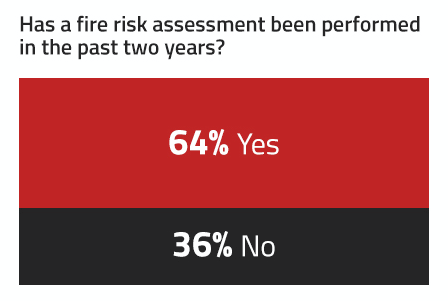 Fire risk assessments are not only a legal requirement, they are also the most effective form of proactive fire safety that can be utilised within an office, allowing any possible hazards or ineffectual aspects of an evacuation procedure to be spotted and rectified.

Scutum Group’s survey was therefore concerned to find that a large number of offices in the London area were lacking when it came to the required regularity of fire risk assessments – a worrying 36%.

When this statistic is considered in conjunction with another from the survey, which suggested that 19% of offices asked had been the victims of a fire (55% of which occurred within the last two years), the importance of risk assessments becomes clear. 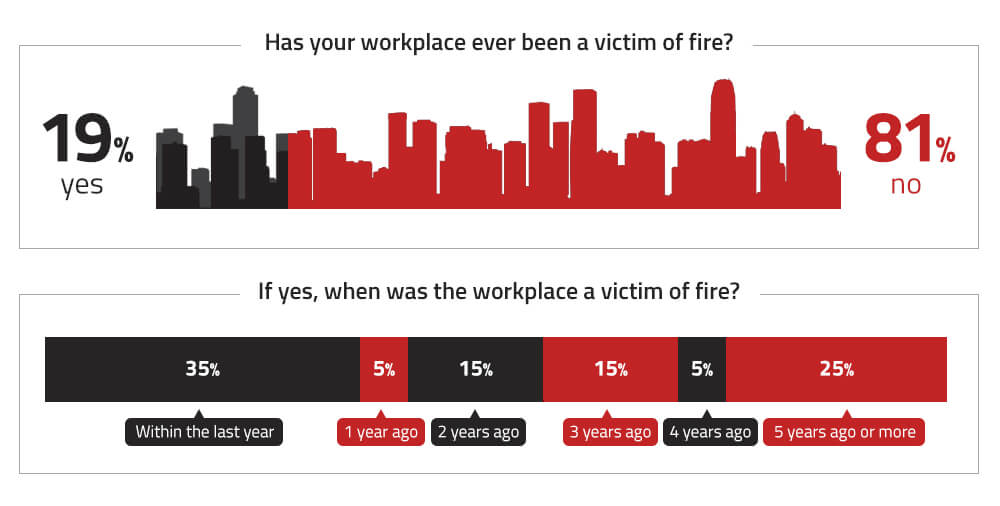 Similarly, 31% of those asked admit to not having undergone any form of fire safety training (a higher percentage among the offices with a smaller staff base). With fire wardens not always able to be first on the scene in the event of an emergency, it is essential that there is a wider understanding regarding the basics of fire safety among the staff. A failure to act, or acting in the incorrect manner, can very much compromise the safety of those in the building. Scutum Group provide basic fire safety training for all companies, giving employees a grounding in the foundations of fire safety.

When considering the previous statistic, it is no surprise that there is a distinct lack of knowledge when it comes to fire extinguisher types and their usage. Almost 20% of those surveyed said that they would happily attempt to put out an electrical fire – one of the more common fire types in UK offices – using a water fire extinguisher. Not only would this not extinguish the fire, it would actually exacerbate it as water and electricity do not mix! Similarly, 61% were unaware that CO2 extinguishers were best in this situation – a dangerously high figure.

1 in 5 office workers professed to not even knowing the location of fire extinguishers within their office, so it’s fortunate that Scutum Group incorporate basic extinguisher knowledge into our fire safety training sessions.