Non-Magnetic Fire Extinguishers – Everything You Need To Know

Non-Magnetic Fire Extinguishers – Everything You Need To Know

Each commercial industry in the UK is subject to the guidelines laid out by the Regulatory Reform (Fire Safety) Order 2005 – a piece of legislation that brought together over 70 disparate pieces of fire safety law that existed up until this point.

Some industries and sectors, however, require a more bespoke approach to their fire safety practices – particularly the equipment used in the fight against fire. The types of fire that are more common in fields such as aviation or mechanical industries dictate specific extinguishers, safety doors, detection systems and more that are tailored to the demands of the environment.

Hospitals and healthcare facilities contain many areas that necessitate special attention, with firefighting equipment that reflects their needs. For example, magnetic resonance imaging (MRI) rooms require portable extinguishers that won’t have an effect on the operation of this delicate machinery. 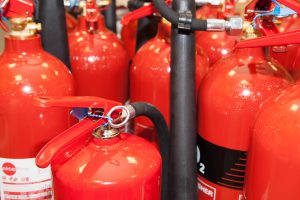 Non-magnetic fire extinguishers are available in a range of types, each suited to the variety of different uses throughout healthcare facilities.

For use on Class B, and some electrical fires, carbon dioxide gives the added advantage of being non-conductive, making it well-suited for use in environments with important electrical components present. For MRI and other sensitive equipment, UL Rated 5B:C models are safest, having been tested up to 7 tesla. These units are available in white for use in hospitals.

Another non-magnetic type available is the water mist extinguisher. De-ionised water is used for maximum efficacy on Class A fires, while still keeping the user safe from the threat of electrical conductivity with a fine spray. Those with a 2A:C rating are again safe up to 7 tesla, making them appropriate for most medical treatment rooms and operating theatres.

An odourless and colourless liquefied gas, FE-36 is a registered trademark of American chemical company DuPont and can be found in a variety of clean agent extinguishers. Essentially a hexafluoropropane when in chemical form, FE-36 is again non-conductive and non-magnetic to sufficient tesla levels, but also contains no ozone-depleting materials that can be found in other extinguishers.

The model most suited to the MRI application is the CleanGuard FE13NM, which leaves no residue and offers improved fire suppressant and magnetic safety performance over water mist and CO2 extinguishers.

By the nature of their operation, magnetic resonance imaging (MRI) scanners generate strong magnetic fields and utilise radiowaves to create images of the human body as a form of medical diagnosis.

This means that all equipment within the vicinity of MRI components will need to be suitable in terms of magnetism and electrical conductivity – including fire extinguishers.

Strong magnetic forces can have diverse and detrimental effects on metallic instruments that are also magnetic, including causing excessive heat, impacting on operation and even causing projectile movement.

The effects of the force could also have an impact on the reading from the MRI itself, altering results in a manner that could be potentially damaging to patients and medical professionals.

While water mist uses a fine spray of de-ionised liquid that reduces its conductivity, it has the propensity to pool after use, causing an electrical hazard.

CO2 extinguishers leave no residue, and non-magnetic versions have been tested up to 7 tesla.

As mentioned previously, extinguishers containing the agent FE-36 (registered trademark of the DuPont company) are often the most suitable, as the hexafluoropropane chemical is safe for use on all sensitive machinery and can be used on all Class A, Class B and electrical fires where water mist and CO2 can only be used on a combination of these fire types.

Don’t be confused by the misleading name of the extinguishing agent – FE-36 has no relation to the chemical symbol for iron (FE), which would be highly hazardous in an MRI environment.

Extinguishers that are safe for use in MRI environments are labelled as such to show that they’ve been sufficiently checked and tested. Those marked with a yellow triangle containing the letter ‘MR’ are classed as MR Conditional, meaning they have been tested in conditions of magnetic resonance up to 3 tesla.

As with many healthcare environments, MRI suites require a specialised approach to fire safety. Along with the magnetic and electrical components present, the areas are carefully controlled in terms of climate, access and hygiene, and the comfort of patients must be of high importance at all times.

All combustible materials are kept to a minimum (such as waste paper bins) and the design and construction of the space is similar to that of a medical cleanroom.